Luton Friends hosted Area Meeting on Sunday last. It was inspiring to be with Quakers from other local meetings, and we tried to give them a very warm welcome over lunch and at teatime. Many thanks to our caretakers for making sure that the Meeting House was looking its very best.

At the meeting itself, a Luton Friend read from Quaker faith and practice 10.20:

… I do not think I am alone in my certainty that it’s in my relationships with people that the deepest religious truths are most vividly disclosed.” (George Gorman)Another Luton Friend gave a short talk about the transformative work of the Quaker Office at the United Nations (QUNO). QUNO addresses some of the greatest and most difficult issues: human rights and refuges, peace and disarmament, food and sustainability, and climate change.  Diplomats, UN officials, staff of NGOs, come together for off-the-record meals in the Geneva House, in a Quaker atmosphere of trust, a meeting of hearts and perhaps then of minds. 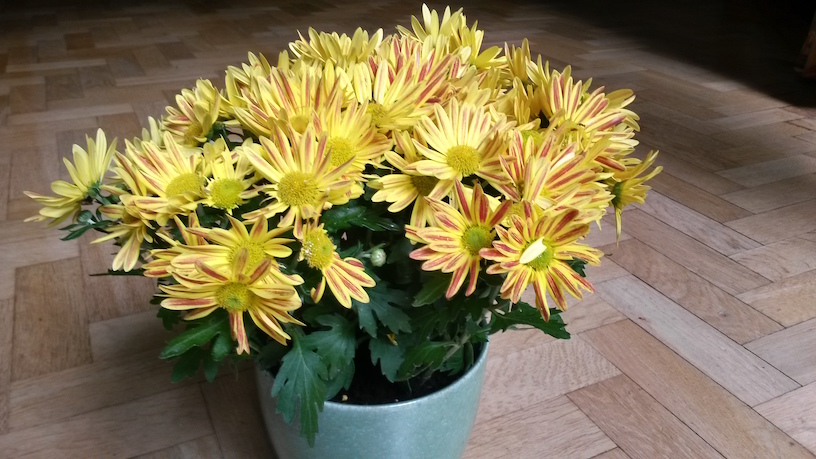 A mostly silent Meeting until a Friend spoke of prayer…

They said that over that past few weeks they had been thinking about the power of prayer. They said it was either very full on or it would appear that we get no answer.

They told of when their daughter was nineteen, she announced she was to have a baby. At the time the daughter lived in a one bedroom flat with her partner. They said that they felt the property was totally unsuitable.

Our Friend told how they had prayed on the situation. Within month the house had burned down and the daughter was placed in temporary accommodation when she was but a month off giving birth. Our Friend questioned if this was the answer to their prayers or was this just something that happened.

Our Friend then told of the birth of the child and soon after their daughter was offered a council flat in a very nice area that was a protected place with security. Their daughter remained there for eight years. And so this outcome became seen as a very positive answer to prayer.

They then spoke of  how they were reading a magazine only last night and in it was an article called ‘Brothel sues church’.The article told of an expanding brothel in America.The nearby church decided to prayer morning, noon and night (literally) for divine intervention. The brothel’s expansion work was completed but within a week the property was struck by lightening and burned to the ground.

The article said that the brothel moved to sue the Church for their prayer and divine intervention. In court the judge said it was a very interesting case where the owner of a brothel believes in divine intervention but the church and congregation denied all knowledge of it.

Responding to terrorism: a statement from Quakers in Britain

As Parliament prepares to debate next steps in Syria, Quakers in Britain have made this statement.

The attacks in Paris on 13 November were deeply shocking and our hearts continue to go out to those killed, injured, bereaved and traumatised.

It is human nature that the closer suffering comes to us, the more acutely we feel the pain and grief. But that experience should sensitise us to the suffering caused repeatedly by acts of war and violent crime in more distant places, including Beirut, Sinai, Bamako and Aleppo.  It should strengthen our determination to build a safer world together.

Terrorism is a deliberate attempt to provoke fear, hatred, division and a state of war. War – especially war with the West – is what ISIS/Daesh wants.  It confirms the image they project of the West as a colonialist ‘crusader’ power, which acts with impunity to impose its will overseas and especially against Muslims.

Our political leaders seem determined that Britain should look strong on the world stage. Quakers in Britain believe our country should act with wisdom and far-sighted courage.  A wisdom that rises above the temptation to respond to every problem with military might. A wisdom that looks back at our failures in Libya and Iraq and Afghanistan and learns from experience. The courage – and strength – to think through the likely consequences of actions to find a long term, lasting solution.

The courageous response of ordinary people who refuse to give up their way of life and refuse to be driven by fear is one that politicians could learn from.

Although there are no quick or easy answers, there are things we can do, all of us together, which will defeat the terrorists more assuredly than military action. Quakers in Britain commit to playing our part in these actions.

We can quieten ourselves and listen to the truth from deep within us that speaks of love, mutual respect, humanity and peace.

We can and will refuse to be divided.  By bridge-building among faiths and within our local communities we can challenge and rise above the ideologies of hate and actively love our neighbour.

By welcoming refugees, we can not only meet the acute needs of those individuals but also undercut the narrative of those who seek to create fear and mistrust.

And we can ask our political leaders to:

The statement concludes with this extract from a statement made by Quakers in Britain in 1943 (Quaker Faith and Practice 24.09):

“True peace cannot be dictated, it can only be built in co-operation between all peoples.  None of us, no nation, no citizen, is free from some responsibility for this.”

·               Around 22,000 people attend 480 Quaker meetings in Britain. Their commitment to equality, justice, peace, simplicity and truth challenges them to seek positive social and legislative change. Our readings today were from Quaker faith and practice:

“At the World Conference of Friends in 1991, Val Ferguson asked:
Does anything unite this diverse group beyond our common love and humanity? Does anything make us distinctively Quaker? I say yes. Each of us has different emphases and special insights, but wherever Friends are affirming each other’s authentic experience of God, rather than demanding credal statements, we are being God’s faithful Quakers. Wherever we are seeking God’s will rather than human wisdom, especially when conflict might arise, we are being faithful Quakers. Wherever we are affirming the total equality of men and women,
we are being God’s faithful Quakers. Wherever there is no division between our words and our actions, we are being faithful. Whenever we affirm that no one – priest, pastor, clerk, elder – stands between us and the glorious and mystical experience of God in our lives, we are faithful Friends. Whether we sing or whether we wait in silence, as long as we are listening with the whole of our being and seeking the baptism and communion of living water, we will be one in the Spirit.” 29.16
“Therefore, dear Friends, wait in the Light, that the Word of the Lord may dwell plentifully in you.”
William Dewsbury, 1675. 29.19

One Friend played a piece on a recorder, the marvellous Ode to Joy from Beethoven’s Ninth Symphony.
Another Friend recalled that Beethoven composed this supreme expression of elation after he had become deaf, suggesting the intensity and wonder of mystical experience even out of difficulty and distress.
We heard updates on the life situations of some Friends after meeting for worship. There was also the job of clearing the grounds of the Meeting House of rubbish, much of it apparently left by a rough sleeper.

Click on the orange circle icon with a white triangle in it below to play the audio: A sunny but chilly day. Long shadows via a low slung sun in an autumn sky. Leaves falling on damp grass. You know. That kind of things.

Do you take part as often as you can in meetings for church affairs? Are you familiar enough with our church government to contribute to its disciplined processes? Do you consider difficult questions with an informed mind as well as a generous and loving spirit? Are you prepared to let your insights and personal wishes take their place alongside those of others or be set aside as the meeting seeks the right way forward? If you cannot attend, uphold the meeting prayerfully.

During bridging time we gave thoughts of holding an absent attender in the light as he was understandably absent from the meeting as he was at the side of his Mother who is terminally ill. We wish them love, strength and fortitude.

We moved on to PM (Preparative Meeting) where we discussed the recent AM Poverty In Britain Event, the current state of finances, the 2014 triennial report and the continuing use and development of our revamped website.

Discussion too on how best to green our meeting and meeting house in terms of saving energy and making users of the facilities aware of that too (common sense stuff really but we can all easily forget).

We vexed on how best we can reach out to the wider community and reminded ourselves to take time to be aware of things in the wider Luton community we can possibly contribute to as a group.

Plans to make some short audio and video were put in place which we’d like as many members and attenders to contribute to as possible.

We also set a provisional date for a social get together music evening choosing two favourite pieces of music each.

The date for the next PM is Sunday 5th January 2014