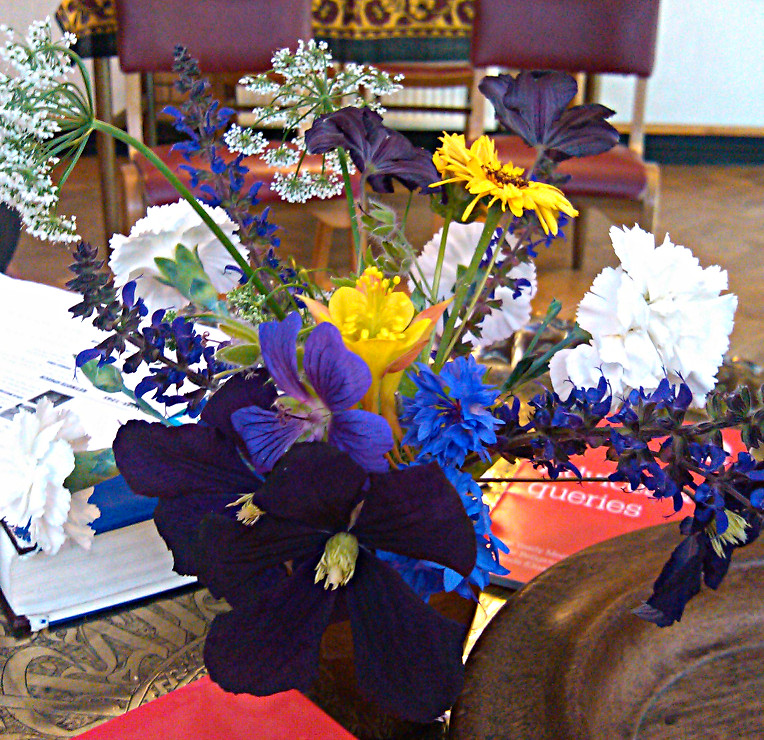 Another warm and sunny day at Meeting. Our silence was shared with a visiting fly (and almost shared by a squirrel who was curious about the open door).

During Meeting a Harpenden Friend spoke of feeling fortunate to have the little book of Advice & Queries. That their copy also included notes and poems by Erica Stapleton. They read from Advices & Queries section 1 to 3.

Much later another Harpenden Friend spoke to say that, to them at least, it seemed like we’re in for a long hot summer of sporting competition and religious conflict to the extent that some people might argue that we get rid of them both; sport & religion. Evolutionary biologists, he mused may tell us that competitive behaviour is a legacy evololutionary behaviour that we all have inside us but that many of them would also argue that co-operative behaviour is part of our inheritance and that it is in our own self interest to co-operate. They also said that Quakerism was born at a time of religious conflict in this country and the principles contained in Advices & Queries came out of that period. They were looking for a way of expressing their religious belief in a way that was more inclusive & co-operative.

They continued to say that sport and religion were at their best when these ideals were incorporated into them. They hoped and prayed that those who, in the name of religion would seek to harm and destroy could also be brought to understand those principles. That it was in their self interest to have a society in which we can all learn to co-operate and tolerate each other.

During bridging time a Luton Friend asked us all to remember the huge number of refugees who are victims of armed conflict. They believed that statistically these numbers were now as high or even higher than at the time of the second world war  and the years after it and that they felt something tragic was happening in our world.

Another Luton Friend then spoke to say they had been listening to the radio in the car on the way into Meeting and that it was examining  what’s happening in Iraq with ISIS etc and that those that made up this group were less born out of religion but a mixture of disperate groups who were perhaps united in their opposition to the current Iraqi government though it was a very complicated situation but more part of a process of and a result of increasing world militarisation. They hoped for a future where Quakers were perhaps even more involved in matters of conflict resolution.

Those who try to make the world a better place

A Harpenden Friend who had read from Advices & Queries earlier spoke about it being very  easy to get very depressed but tthat here had been challenges over the centuries and although they themselves were not a fundamentalist Christian that they they could see that Andrew White in Bagdhad and those before him had tried to make the world a better place including those who had tried to follow Jesus’ example.

After Meeting it was tea (redbush too),coffee and chat time but we were reminded that next week was a shared lunch and that we might like to bring donations for our respective local foodbanks too.