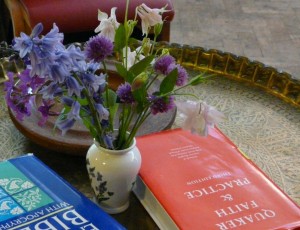 Another friend spoke of being reminded of a story where a man was visiting meetings around the country and arrived early at one meeting house so sat down in a chair to wait for friends to arrive. The first person to arrive promptly asked them to move as the place they had chose was where they normally sat.

They too were not sat where they normally liked to be seated but though they sat with their back to the window they felt they became more aware of the sounds of birds through the door left open so as to allow a breeze to cool a still warm late summer morning. They were grateful that sitting elsewhere had enhanced their appreciation of the sounds of nearby nature.

Thanks and appreciation was also expressed for friends who were at Balcombe as part of concerns regarding fracking.