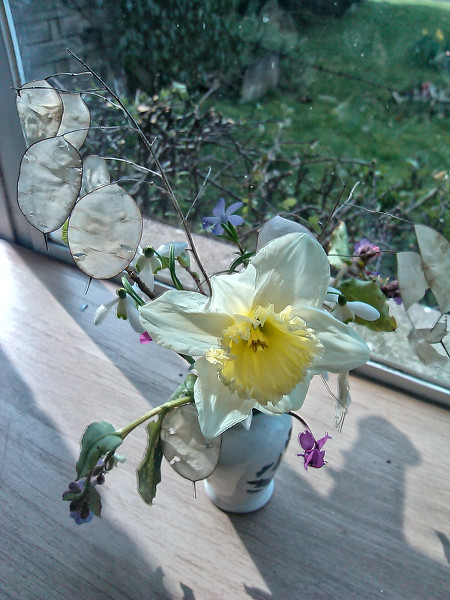 The weather is almost spring-like with one national newspaper predicting both an imminent heatwave and a minus ten icy blast on the same day. From the library where we sit during winter time we could see the early activities of a promised spring. Blue tits, robins and other birds flitted from tree to tree gathering what they needed. Our over-wintering ladybirds that hibernate in a found corner indoors had awoken and moved from their one spot.

People and their dogs wandered across the scene outside the window.

In wishing for simplicity

A Friend stood to reflect and share. They said that in wishing that life was more simple than it appears to be , they thought it was easy to slip into a mindset that, in days gone by, life was simple. But that fear of the elements, invasion, plague have always been there even before the invention of democracy. They thought we needed to relish the simple things; a spring flower, a sunrise, a happy moment, a bird in flight. They were sure that we could make our own list of such things.

They then read from Quaker Faith & Practice 25.08

This is a marvellous world, full of beauty and splendour; it is also an unrelenting and savage world, and we are not the only living things prone to dominate if given the chance. In our fumbling, chaotic way, we do also make gardens, irrigate the desert, fly to the moon and compose symphonies. Some of us are trying to save species other than ourselves…

We have no reason to be either arrogant or complacent: one look at the stars or through a microscope is sufficient to quell such notions. But we have to accept our position in the world with as much grace, responsibility and fortitude as we can muster, and try to grow up to our mission of love in this tangle of prospects and torments.

Later during Meeting another Friend reflected on a recent short break away. They shared that they’d just returned from time away on the Norfolk coast and that, for them, it was a marvellous experience and they knew they were so fortunate to be able to experience it. They recounted huge,wild open mudflats, the variety of wild birds. It made them realise that the spirit, the ground of being, is in everything, in nature, in ourselves as well as inanimate things too. They thought that what is sustaining is being able to see and keep those connections. An awareness that everything is connected. Making connections with that and other people is what is sustaining, they thought.

From torment to love and inspiration

Another Friend stood and reflected on the earlier reading that mentioned torment. They said they had met somebody who no doubt dealt with torment in that they were somebody who worked in victim support. They said they imagined that this woman would often feel overwhelmed by what she faced shared with her. Our Friend said that she spoke with huge love, intensity and inspiration about her work as if she could do nothing else in her life. The Friend said they felt so moved by that and the connection this woman clearly had with those that she helped.

After Meeting we shared our usual refreshments though many had to dash off after a short time to area Meeting in St Albans.

← Tate Gallery: BP To End Sponsorship
White Feather Diaries: Love Your Enemies And Make Them Tea →
Translate »
We use cookies to ensure that we give you the best experience on our website. If you continue to use this site we will assume that you are happy with it.Ok