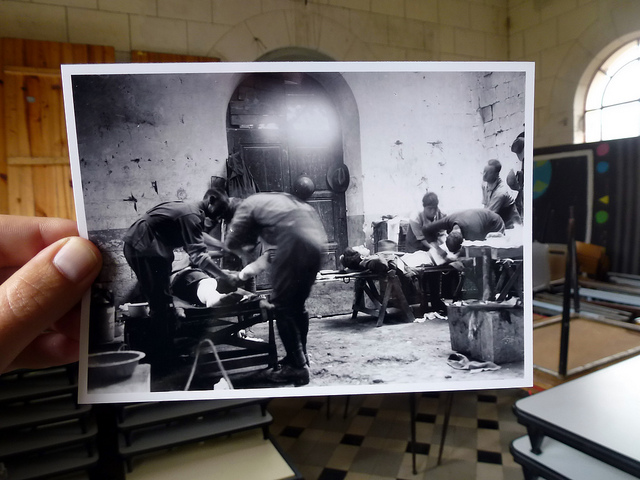 Meeting took plave in a not overly warm summer morning. Occaisionally the reshness of oncoming autumn air could perhaps be felt. Butterflies weved aroundthe wild grass and flowers in the area that has been left to go wild out the back of the meeting house.

We sat in our usual circle for Meeting.

A while into sitting a Friend spoke, saying that it was difficult looking out at the graveyard and not remember that 100 years ago many young men died. Walking around the graveyard they could see many young men who had died at the battle of the Somme in 1916. They said that one of the unique features or consequences of such horror was that men who had previously refused to serve in combat were allowed to form ambulance services in battle at the time.

They then read a passage by a Quaker who served at the time:

“There is hardly a moment when my thoughts are not with the men in France, eager to help the wounded by immediate human touch with their sufferings. This I was privileged to do during nineteen months spent at the Front with the Friends Ambulance Unit from October 1914 to May 1916, when it was still possible to give voluntary service. At times the impulse to return to this work becomes almost irresistible. May God steady me, and keep me faithful to a call I have heard above the roar of the guns. By the feverish activity of my hands, I might help to save a fraction of the present human wreckage. That would be for me no sacrifice. It costs far more to spend mind and spirit, if need be, in the silence of a prison cell, in passionate witness for the great truths of Peace. That is the call I hear. I believe that only spiritual influence will avail to free the world at last from war, to free the soldiers’ little ones and confused struggling humanity itself from all that men and women are suffering now. I honour those who, in loyalty to conscience, have gone out to fight. In a crisis like the present it would be unbecoming to elaborate the reasons which have led me to a course so different. Today a man must act. I believe, with the strength of my whole being, that standing here I am enlisted in active service as a soldier of Jesus Christ, who bids every man be true to the sense of duty that is laid upon his soul.”

Image by ThuTheseLines under this creative commons licence

← The Divestment Movement At Friends House Aug 28
At Meeting: 7th August 2016 →
Translate »
We use cookies to ensure that we give you the best experience on our website. If you continue to use this site we will assume that you are happy with it.Ok