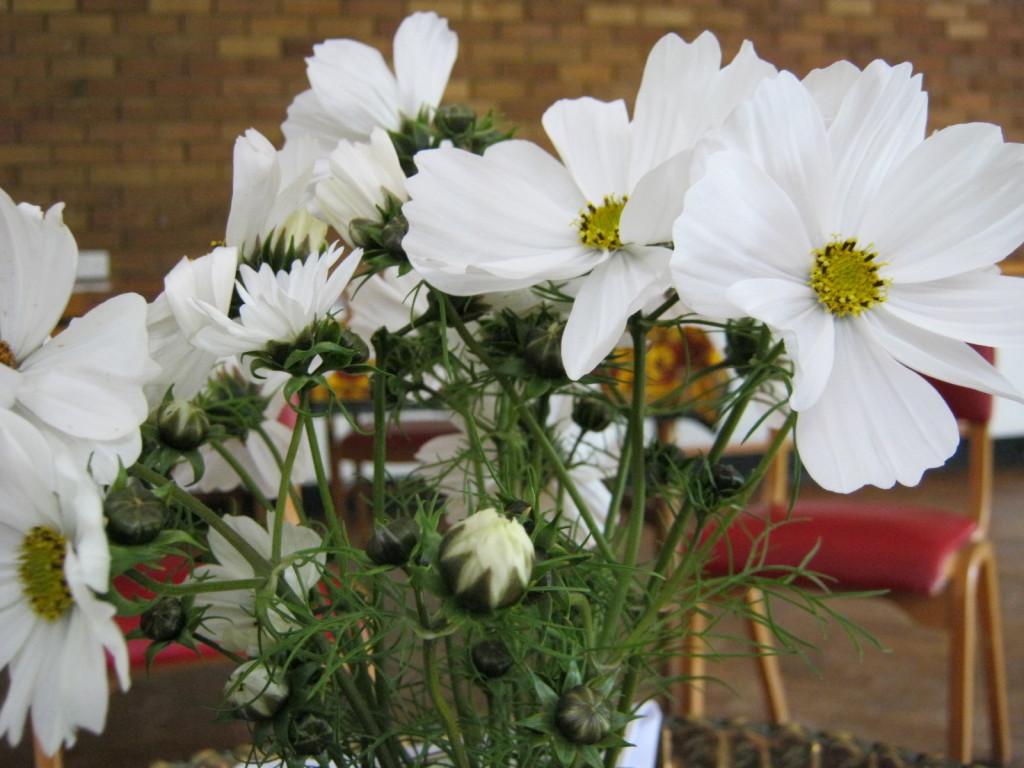 “We do not own the world, and its riches are not ours to dispose of at will. Show a loving consideration for all creatures, and seek to maintain the beauty and variety of the world. Work to ensure that our increasing power over nature is used responsibly, with reverence for life. Rejoice in the splendour of God’s continuing creation.”

This passage was read out at meeting today. A Friend appreciated greatly the reading and wondered if we could have more plants within the meeting house. They also thought it was always good to share access to nature.

Another Friend commented on the gentle light changes from nature outside the window during silent worship and how the insects caught the autumn sun.

Tea and Coffee was shared with much eager conversation. A cake was shared and used to accept ‘what you can afford’ payments towards a donation we made to help Harpenden Meeting House refurbishment. We discussed arrangements for those of us attending next week’s poverty in Britain event at Watford Meeting House.

Quakers recently attended the annual Luton Peace Walk, a multi faith, multi community event highlighting how the vast majority of Luton's diverse cultures happily co-exist in peace. The walk started at the town hall and went on from there to the Sikh temple. After a while the walk moved onto The Holy Ghost Church for a presentation by St Joseph's Catholic School pupils and then onto the Mosque next door as our final destination. Here's an informal record of the event made by Luton Quakers. Subtitles for the hard of hearing and a full transcript are available optionally within the video and over on You Tube itself. 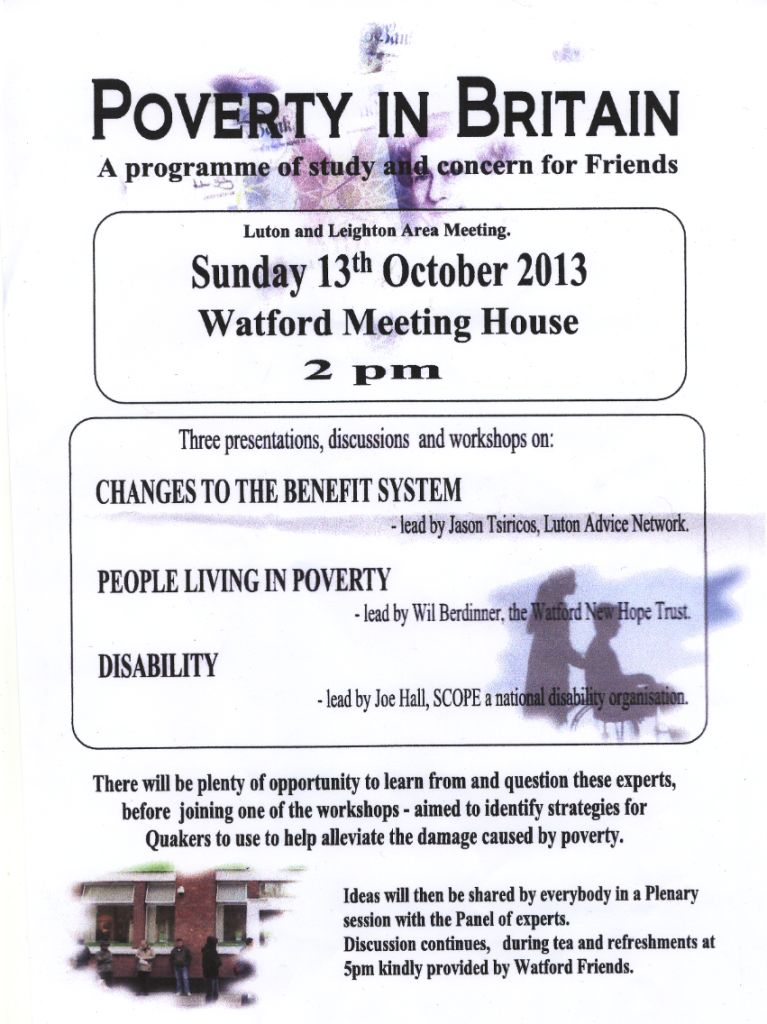 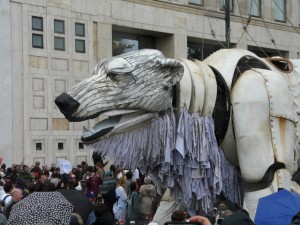 She is beautiful: the star attraction this afternoon on the South Bank.  All white, Aurora is a giant polar bear about the height of a double-decker bus. Her legs lumber along the streets, and her head moves when she opens her mouth to roar.  It has to be said that she is human-powered, with people inside at the controls – oh, and she has a mast reminiscent of Rainbow Warrior and steps at her behind. 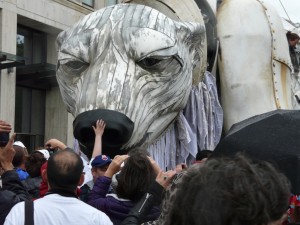 Quakers had decided to support the Greenpeace Aurora event, through the QPSW committee that I am part of – and so Annie and I went along, in a procession of approaching 3000 protesters, I estimate.  We ended up at Shell House – Shell is leading the oil companies in the rush to extract oil and gas from the Arctic, just at a time when the sea ice there is melting away. 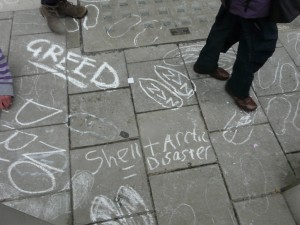 This campaign is designed to stop the exploitation of the Arctic, with a ban on drilling for fossil fuels,and to leave it as unspoilt wilderness.  Shell had obtained an injunction against Greenpeace, but the marchers were invited to defy this symbolically by crossing the line around the building to draw their footprints in chalk on the pavement. 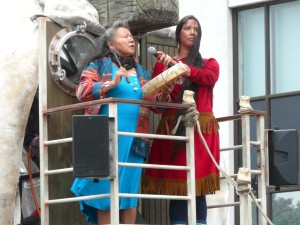 Greenpeace and by two women from the First Nations people of the Arctic.  One, an elder, spoke of how they were guardians of the Arctic for all time and called on “spirit-people” everywhere to make common causeto save the Earth.  She intoned and sang an Inuit prayer that had come to her in a dream.  It was very moving.

Aurora will go on her travels to other countries, as part of a world-wide campaign.

Written by Colin Hall, Clerk to Luton Quaker Meeting who along with his wife Anne attended the Greenpeace Aurora protest on a rainy Sunday September 15th  in London. With thanks also to Colin for the supplied images.

Autumnal weather is truly with us now with wind and intermittent squally showers. Noticably colder. The first signs of autumn leaves are with us with the best of autumn colours yet to come.

A smaller meeting attendance wise today due to various member and attendee commitments elsewhere. Our Clerk attended before leaving early to attend an ecological protest in London.

As the flowing of the ocean doth fill every creek and branch thereof, and then retires again towards its own being and fulness, and leaves a savour behind it; so doth the life and virtue of God flow into every one of your hearts, whom he hath made partakers of his divine nature; and when it withdraws but a little, it leaves a sweet savour behind it; that many can say they are made clean through the word that he hath spoken to them. In which innocent condition you may see what you are in the presence of God, and what you are without him… Stand still, and cease from thine own working, and in due time thou shalt enter into the rest, and thy eyes shall behold his salvation, whose testimonies are sure, and righteous altogether. 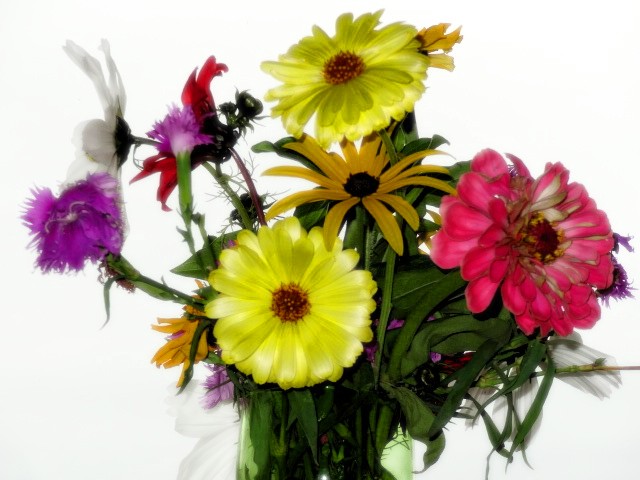 Love was the first motion, and then a concern arose to spend some time with the Indians, that I might feel and understand their life, and the Spirit they live in, if haply I might receive some instruction from them, or they be in any degree helped forward by my following the leadings of Truth amongst them. And as it pleased the Lord to make way for my going at a time when the troubles of war were increasing and when by reason of much wet weather travelling was more difficult than usual at that season, I looked upon it as a more favourable opportunity to season my mind, and bring me into a nearer sympathy with them. And as mine eye was to the great Father of Mercies, humbly desiring to learn what his will was concerning me, I was made quiet and content.

Quite a few notices after silent worship concerning events at other Quaker meeting houses which we hope to write about seperately or link to on Twitter.

As usual we all had much to talk about and discuss over tea and coffee. 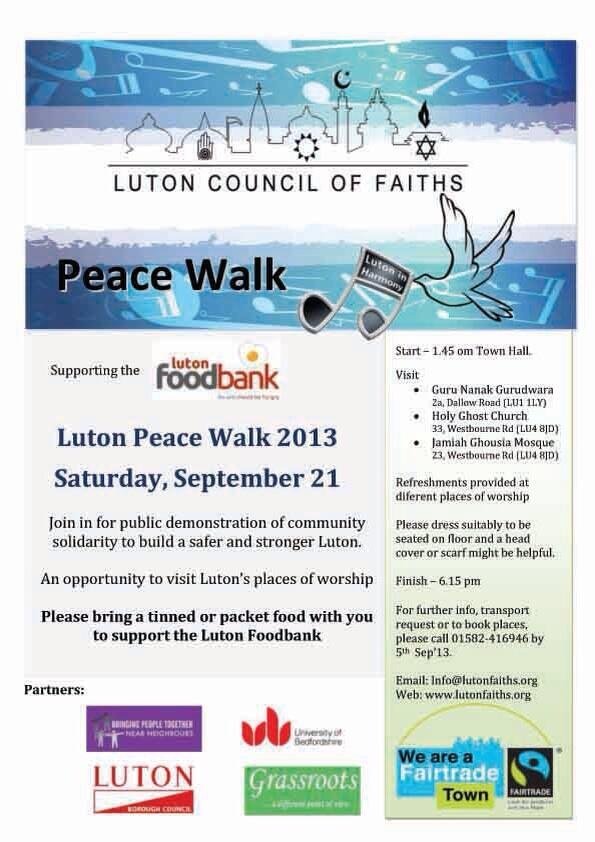 Luton Peace Walk is on September 21st this year.Might still just be time to register.

Browsing some archived Quaker posters. The message of many are just as relevant now. Take war for example: pic.twitter.com/uLyEYY1a5t

A cooler Sunday weatherwise (the great British obsession) than of late but still Sunny with a hint perhaps of Autumn waiting in the wings. As it was also PM (Preparative Meeting) our silent worship was, as usual, shortened by 15 minutes to allow for this. 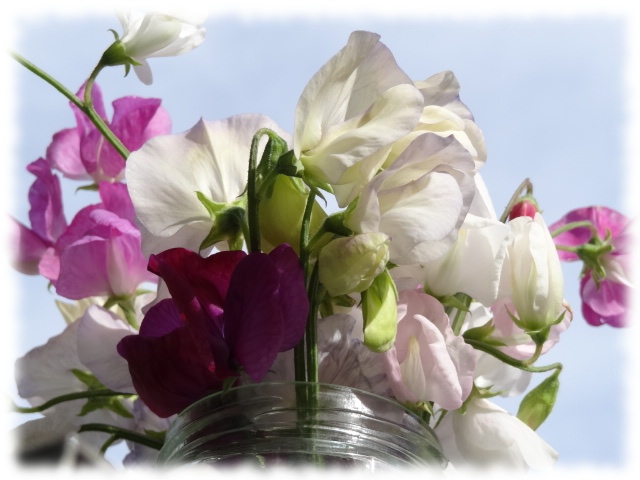 A friend read an extract from Quaker Faith & Practice 11.01 regarding membership.

Today membership may not involve putting liberty, goods or life at risk but the spiritual understanding of membership is, in essentials, the same as that which guided the 'Children of the Light'. People still become Friends through 'convincement', and like early Friends they wrestle and rejoice with that experience. Membership is still seen as a discipleship, a discipline within a broadly Christian perspective and our Quaker tradition, where the way we live is as important as the beliefs we affirm.

Like all discipleships, membership has its elements of commitment and responsibility but it is also about joy and celebration. Membership is a way of saying to the meeting that you feel at home, and in the right place. Membership is also a way of saying to the meeting, and to the world, that you accept at least the fundamental elements of being a Quaker: the understanding of divine guidance, the manner of corporate worship and the ordering of the meeting's business, the practical expression of inward convictions and the equality of all before God. In asking to be admitted into the community of the meeting you are affirming what the meeting stands for and declaring your willingness to contribute to its life.

Another friend responded to this by saying that sometimes they felt slightly inadequate at times when visiting other meetings in terms of the time they have been able to devote to service compared to some others.

They also expressed heartfelt thanks to elders and overseers for the time and energy they put in and how valuable and appreciated that was. Our friend also expressed thanks to the Clerk for the speedy response in putting together and sending off the letter to our local MPs regarding our concerns ahead of the recent votes in Parliament over possible military action in Syria.

We all agreed with this and another friend spoke for us all when they said that the compositionletter was 120% right in how it spoke for the local meeting.

Ahead of PM the Clerk read from Advices & Queries 14:

Are your meetings for church affairs held in a spirit of worship and in dependence on the guidance of God? Remember that we do not seek a majority decision nor even consensus. As we wait patiently for divine guidance our experience is that the right way will open and we shall be led into unity.